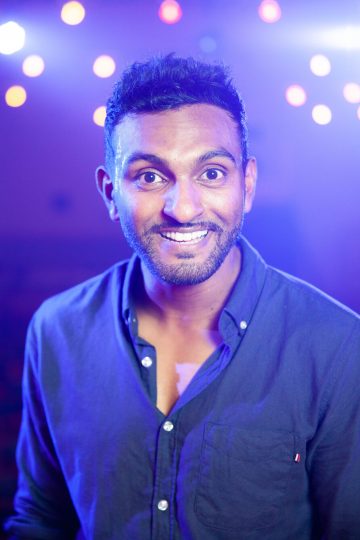 Tell us about your cultural heritage.

My background is Sri Lankan. Both of my parents are from there, my mum from Colombo and my dad from down south, in Galle. I was born and raised in Melbourne, after my parents migrated to Australia in the late 70s. I tend to go back to Sri Lanka every other year where I attempt to speak Tamil but fail miserably. I succeed at making random Sri Lankans on the streets stop and laugh at my poor attempts.

You’re obviously smart and very funny. But can you cook?

I love cooking, but I tend to follow recipes. So does that mean I’m not really a cook? I’m basically a plagiarist. The only times I veer off the recipe is when I don’t have or forgot to buy – a particular ingredient. That’s when I become a master improviser in the kitchen, substituting curry powder for basically any missing spice.

Is there a particular dish from your childhood that you still eat all the time?

Yes. Kalliya. I think that’s how it’s spelt. In fact – I had it last night at my mum’s! It’s a Sri Lankan Muslim dish that’s basically potato and eggplant and OMG, it’s my comfort food, and whenever I’m away somewhere, it’s the one thing I crave, and when I’m eating it, I feel like I’m home.

Why do you think it’s important for Australians to embrace multiculturalism?

Because imagine only being aware of how one single ethnic group in the whole world lives life. You’d be the most boring person in any room. You’d get food envy watching your co-workers eat lunch from around the world, and you’d start to hate yourself and your own adherence to mono-culturalism. You’d end up starting a kooky insular political party, but quickly realise Pauline and her mates have the monopoly on that already.

So better off just chilling out, stop fighting it, embrace the reality of the world – we’re all from everywhere, and that’s a great thing!

It’s also fairly arrogant to look at the sum of the whole world, of the combined experiences of human life and go ‘nahhhhhh, I reckon me and my tribe nailed it. Nothing we can learn from anyone else!”

How has comedy helped you portray what, essentially, are serious messages?

I wouldn’t be able to fully speak my mind in any other way. I feel like I can talk about stuff in comedy that requires a lot more skill to talk about in other mediums. Comedy for me, is a safe place to rant about things around me that infuriate me. And the laughter for me, and for the audience – who often share the same experiences of racism or of belonging to a marginalised community – is in laughing at something that ordinarily makes us upset.

Laughs aside, what’s the one message you’d really like people to understand about racial discrimination?

It’s not fun, and it harms. None of us want to be fighting racism for the entirety of our lives. But we have to, because how can we truly enjoy life knowing that we all don’t get to experience life as fairly and as fully as each other. Also, some of us have to fight racial discrimination because we have no other choice, and racism finds us, whether we try to hide from it or not, and that’s exhausting. I’m lucky to be a cocky, outspoken person with limited shame – but most people just want to get on with their day-to-day, without having to navigate around systems of oppression – just to make a life and remain living.

Finally, which three guests would you most like to have a meal with, and why?

My mum. Obviously. If I didn’t put her down as my first pick – you’d be reading this at my funeral. Also, she’s the best dinner entertainment - and person – I know.

Mohammed Ali. The Greatest. One of my favourite people that ever was. He cared most for the voiceless. I love how he was never afraid – in the ring, speaking truth, saying no, through sickness, and when facing death. He knew how fleeting life was and was in a hurry to change the world.

Richard Pryor. One of my favourite comedians, and the best ever. Like Ali, Pryor spoke his entire truth, at all times, and could turn anything into funny, especially when the subject matter wasn’t light. Even though my mum tells me off for saying ‘bloody’ on stage, she’d find Pryor’s bad language hilarious, even at the dinner table.