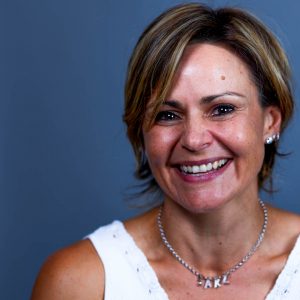 Krisztina is Hungarian and grew up in Communist Hungary where her parents were restaurateurs.  Her father was a well-known local who ran a famous restaurant and night club in Budapest.

Krisztina’s parents decided to leave Hungary in 1980 in search for a life that provided more opportunities for their children. As they were leaving, they told Krisztina and her two younger brothers they were going on holiday, but in fact they went to Germany where they lived for two years.

Krisztina’s father was then sponsored to work in Australia. When they arrived in Sydney they lived at Villawood, the housing commission for immigrants, for 10 months. Her parents did not speak English, so living at Villawood gave them time to assimilate before they moved to a small apartment near the beach in Sydney’s Eastern suburbs.

Her father worked hard, and business was in his blood. Wherever they ended up used his skills to keep the family afloat running a range of businesses including a hamburger shop, a gourmet deli chain, a restaurant and bakeries.  At the end of the day, says Krisztina, we were immigrants just trying to make ends meet.

Krisztina has four children aged 14, 12, 8 and 6.  She is passing on to them what was instilled in her as a child which is the importance of working hard to create opportunities.  She draws on her father’s drive and resilience and teaches her children to save money.

She sees no reason why pasta can’t be a dessert though her children beg to differ.  She loves serving pasta with poppy seeds and icing sugar or with cottage cheese and raisins.